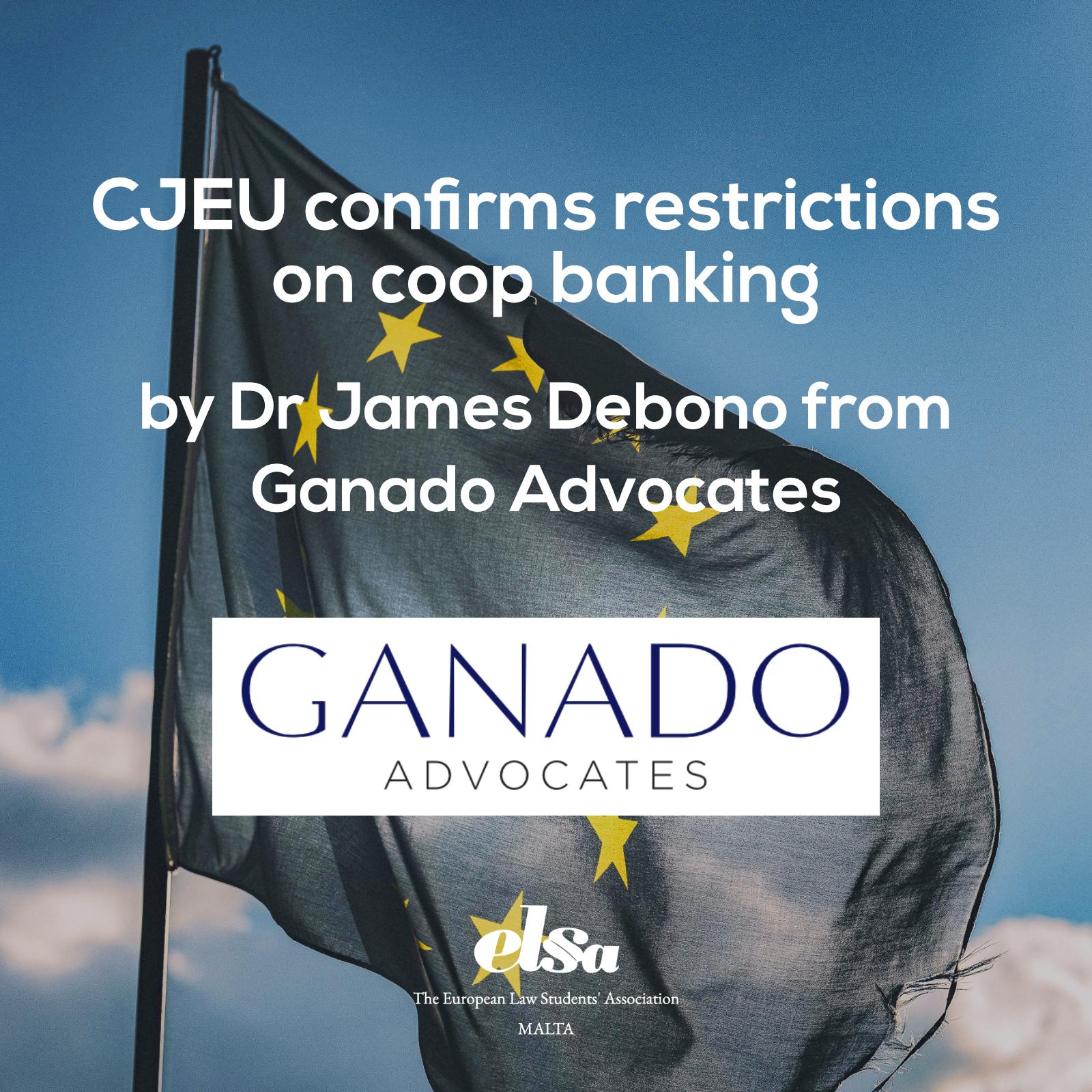 On 11 February 2020, Advocate General Hogan from the Court of Justice of the European Union (“CJEU”), delivered his opinion on “OC and others vs Banca d’Italia” (Case C-686/18).

The Consiglio di Stato (Council of State) had requested for a preliminary ruling in order to ascertain whether a national provision under Italian law, which mandates the conversion of a co-operative bank into a private company if it exceeds a certain asset threshold, is legal or otherwise under EU law, specifically Regulation (EU) No 575/2013 (“CRR”) Delegated Regulation (EU) No 241/2014 and the Treaty on the Functioning of the European Union. While assessing Italian Decree Law No. 3/2015 under the lens of the Charter of Fundamental Rights of the European Union (the “Charter”) and EU prudential and state aid rules, Hogan asserted that in his opinion the cited Italian legislation does not go against the multiple facets of European law.

The necessity for this preliminary ruling initially stemmed from three applications lodged in the Regional Administrative Court of Lazio by separate groups of anonymous entities, bearing mutual shareholding in various Italian cooperative banks, Adusbef and Federconsumatori – against Banca D’Italia, challenging, in particular, the following acts carried out by the latter:

The Italian law in question allows the Banca d’Italia to set an EUR 8 billion asset threshold for co-operative banks. If exceeded, the credit institution in question had to implement (within a year from when the threshold was exceeded) one of the three options, either:

• reduce the total amount of assets below the threshold imposed; or

• convert itself into a company limited by shares; or

If the cooperative in question fails to abide with one of those avenues, this may result in the Banca d’Italiaproposing to the European Central Bank the revocation of the banking licence, or the banning of the credit institution from embarking on new operations. Furthermore, the defaulting bank may also run the risk of having the Italian Minister for the Economy and Finance initiate compulsory administrative liquidation.The acts adopted by the Italian legislature also allow such a cooperative bank, once converted into a company limited by shares, to defer redemption of shares held by a withdrawing shareholder for an unlimited period and to limit the associated amount, either in full or in part.

According to the European Economic and Social Committee, Banca Popolare ended 2014 owning a sum of 400 billion Euro in total assets, a sum which totally dwarfs the 8-billion-Euro cap imposed by Banca D’Italia. This discrepancy reveals the applicants’ motivations behind challenging such a provision, for it poses the possibility for the need of a total overhaul to the large majority of cooperative banks’ operating model.

In his opinion, AG Hogan dismantled every question posed by the Consiglio di Stato in order to possibly identify any possible preclusion, as alleged by the applicants. Primarily, he referred to past EU case law wherein Court stressed that a referring court is supposed to be aware of, and which it is bound scrupulously to, observe the requirements concerning the content of a request for a preliminary ruling set out in Article 94 of the Rules of Procedure.

He dismissed the alleged breach of human rights while highlighting the CJEU has no jurisdiction to interpret the Charter. The rationale behind such dismissal was that settled caselaw established the notion that the protection of fundamental rights is binding on Member States whenever such rights implement EU law. He concludes that the Court of Justice has no jurisdiction to provide the interpretation of the Charter, mainly because the referring court does not delve into the matter as to how Italian law would be considered to be an implementation of EU law.

From a prudential perspective, AG Hogan stated that Article 29 CRR, which stipulates the criteria which qualify a capital instrument to be Common Equity Tier 1 and which sets the parameters for determining whether the ECB will directly supervise a significant bank, neither requires nor precludes the enactment of any asset or capital threshold and that it bears no correlation to Article 1 of Decree Law 3/2015. Similarly, Hogan then analysed Article 6(4) of Regulation No.1024/2013 which merely determines the characteristics which would qualify a credit institution as being “significant” or “less significant”. One of the criteria listed establishes a 30-billion-euro threshold with regards to asset ownership. Similarly, AG Hogan once again found no relevance of this asset threshold to the one mentioned in Decree law 3/2015.

As to the dispute of whether CRR and/or the Delegated Regulation preclude national law which permits a cooperative bank to defer redemption for an unlimited period, and to limit such amount in full or in part, AG Hogan believes that it is in the public’s interest to avoid the possible scenario of an abrupt withdrawal of funds which may put the institution concerned in financial stress. Therefore, his opinion is that the EU regulations in question do not preclude the imposition of Art.1(1) of Decree Law No. 3/2015, so long as such provision abides to Art.10(3) of Delegated Regulation no. 241/2014.

In a nutshell, the AG’s conclusion was quite consistent and forthright. L. Wissink, Utrecht PhD candidate in banking supervision, finds rather noteworthy the notion that Hogan does not deem the law imposing an asset threshold to be an implementation of European law. She further notes that this starkly contrasts the ECB’s broad interpretation approach of situations related to supervisory competence and powers.

While the European Economic and Social Committee reported that in Europe, cooperative banks have circa 26% deposit market-share and that they finance 27% of the loans to small and medium enterprises in Europe, the cooperative banking concept never took hold in Malta. Notwithstanding, it is essential, even for the local banking sector, to always keep abreast with similar developments on a European supra-national level relating to the banking sphere, and to be aware of certain regulatory dynamics within the European market, which might even affect the competitiveness, and possibly the operations and functions of credit institutions established in Malta.

James Debono would like to thank Matthias Grech, student intern at GANADO Advocates, for his assistance during the drafting of this article.

This article was first published on The Malta Independent on 18 March 2020.

Of Big Fish and Little Ones
A month ago
Exploring DORA – the key features
A month ago
Defunct companies and their restoration to the company register.
A month ago