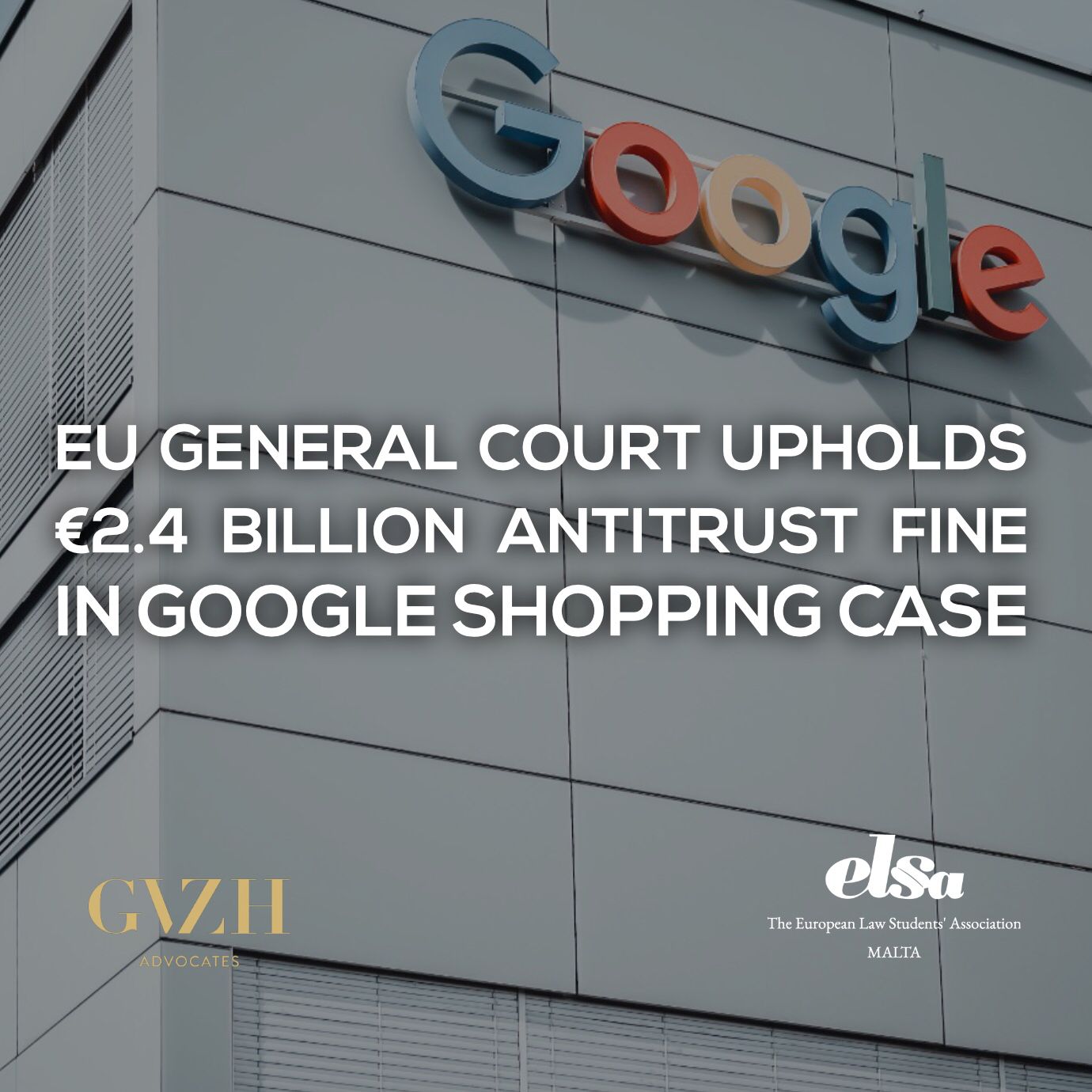 Background of the case

On the 27th June 2017, the European Commission imposed a record-breaking pecuniary penalty of over 2 billion Euro on Google (of which €523,518,000 was imposed jointly and severally on Google and its parent company Alphabet), for an alleged abuse of its dominant position when it favoured its own comparison-shopping search service over other competing comparison-shopping services in the market. Google and Alphabet proceeded to file proceedings against the Commission, before the General Court of the European Union, the second-highest court in the EU, to contest the imposition of such fine.

In a major win for EU digital and competition chief on the 10th November 2021, Commissioner Margrethe Vestager, the General Court delivered a landmark judgement in the Google and Alphabet v. Commission (Google Shopping) case (Case T-612/17), whereby it largely dismissed the action brought by Google and Alphabet, and proceeded to uphold the fine imposed on the US tech giant.

The General Court found that “Google departed from competition on the merits” and noted that “the conduct in question was adopted intentionally, not negligently”, whereby Google favoured its own comparison-shopping service through a more favourable display and positioning of the search results, as well as by using ranking algorithms to its advantage. The Court further noted that due to the universality of Google’s general search engine, which should be designed in such a manner so as to display any possible content in a non-biased manner, by promoting a particular specialised result (i.e. its own services), this involved a certain form of abnormality, which was liable to lead to a weakening of competition in the market.

When analysing the effects of Google’s abusive practice on competition, the General Court confirmed that, in line with Article 102 of the Treaty on the Functioning of the European Union (‘TFEU’), an abuse of a dominant position exists where the dominant undertaking hinders the maintenance of the degree of competition in the market or the growth of that competition through the use of methods different from those adopted under normal competitive circumstances, which abusive nature can be determined merely by demonstrating that such conduct is capable of restricting competition. After an analysis of the actual effects of Google’s abusive practice on other competing comparison-shopping services’ traffic, the Court noted that the Commission had sufficiently proved that such traffic accounted for a large share of their total traffic and that such share could not be effectively replaced by other sources of traffic. The Court concluded that potential outcomes in this regard could include the disappearance of such competing services, less choice for consumers, and the diminishing of innovation in the market. These are all key characteristics of a weakening of competition.

A central legal argument brought by Vestager in the Google Shopping case is the concept of ‘self-preferencing’. This is a situation whereby a company uses its dominant position in one particular market, to help it succeed in another market. Whilst self-preferencing is not in itself a breach of European antitrust laws, the potential harmful effects brought about through self-preferencing do indeed constitute a breach of such laws.

Lastly, with respect to the amount of the penalty imposed by the Commission, the Court carried out its own assessment of the facts so as to determine the level of the penalty to be imposed. In this respect the General Court found that even though the Court was annulling the Commission’s decision with respect to the market for general search services, this essentially had no impact on the amount of the fine, since the Commission had not considered the value of sales on the market of general search services when evaluating the amount of the fine. Furthermore, due to the serious nature of the infringement, and due to the intentional nature of Google’s actions which were done to promote its own services and demote those of its rivals, the Court confirmed the amount of the penalty, that is €2.42 billion. Apart from the fine, Google will also be required to put an end to such abusive conduct within a period of 90 days, or will risk exposing itself to additional penalties of up to 5% of the average daily turnover of Alphabet, for each day of non-compliance. Google and Alphabet now have the option to file an appeal from this decision before the highest court of the EU, the European Court of Justice (‘ECJ’).

Will this decision open the floodgates for other similar rulings?

When looking at the bigger picture, at the moment, there are several controversial views on the direction that EU Competition law should take in the future. Can EU Competition law retain its validity in the digital era, or do we need new regulation to deal with the challenges which are arising from digital platforms and markets? This point has been discussed in greater detail in another one of our articles in this regard.

With respect to the decision given by the General Court in the Google Shopping case, this decision was the first of a trio of decisions pertaining to 3 different antitrust cases pursued against Google, totalling to a whopping €8.25 billion in EU antitrust fines for Google over the last decade. Apart from providing legal clarity for the market, this ruling will also reinforce the EU’s push to regulate big tech.

This decision definitely calls for other dominant companies, including restaurants, hotels and airline companies among others, to be more vigilant and to ensure that they are not operating in breach of any antitrust rules.