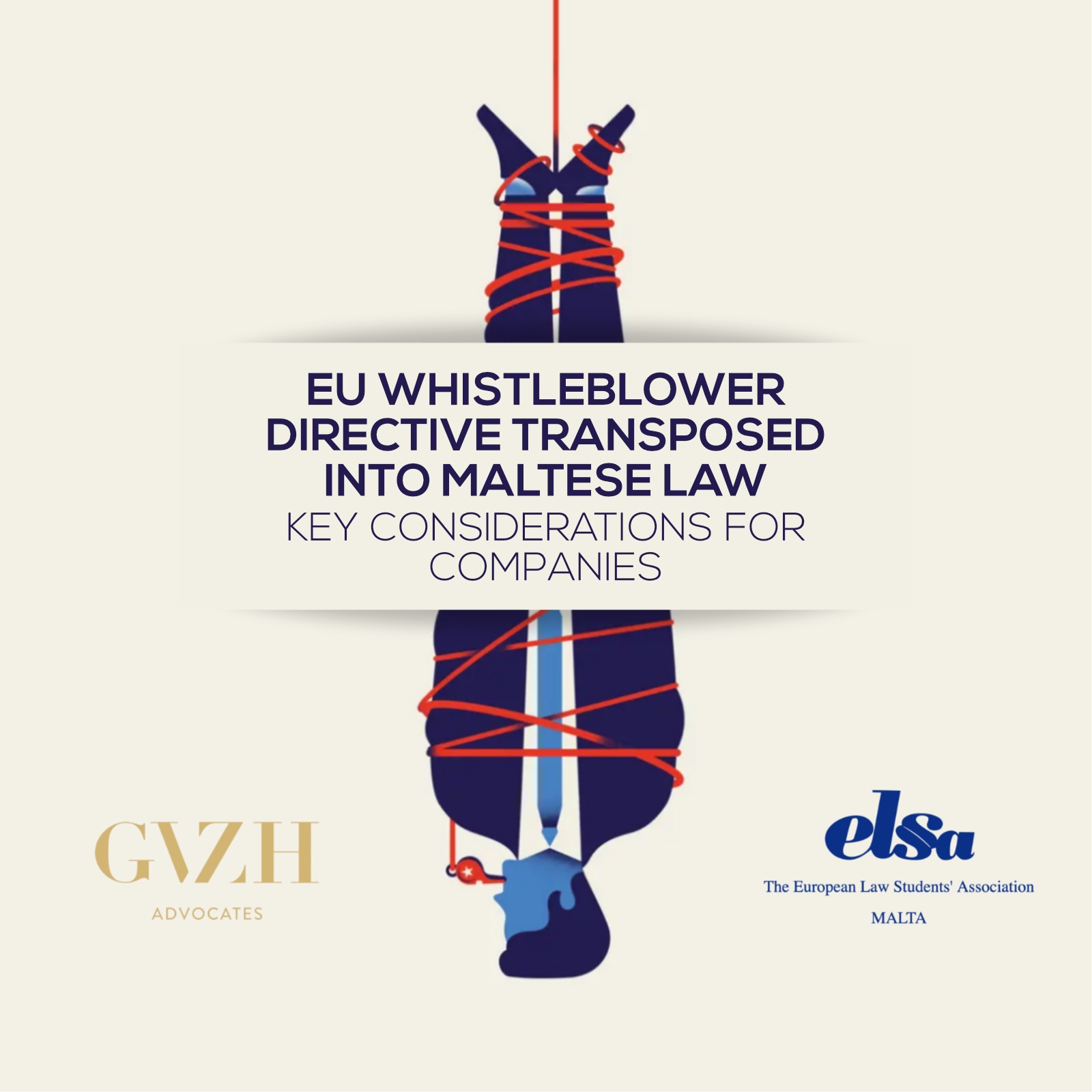 EU Directive 2019/1937 on the protection of persons who report breaches of Union law (“the Directive”), sets out a framework for procedures in terms of which persons who acquired information on breaches in the context of their work-related activities may report or publicly disclose information on such breaches, and serves to set minimum standards for the protection of persons reporting said breaches.

The Directive, which was introduced in October 2019, was transposed into Maltese legislation on the 18th December 2021, introducing several changes to our local legislation.

Main differences between the current Act and Directive

Currently, in Malta, whistleblower protection is regulated by the Protection of the Whistleblower Act, Chapter 527 of the Laws of Malta (“the Act”), which was introduced in September 2013. The Directive aims to create common minimum standards of protection across the EU to whistleblowers who raise breaches of EU law with their employers. The new rules require the creation of safe channels for reporting both within an organisation (through internal reporting channels) and also to public authorities (through external reporting channels). It also provides protection to whistleblowers against retaliation and requires national authorities to adequately inform citizens and train public officials on how to deal with whistleblowing.

One of the main novelties of the Directive is the introduction of the protection of persons who make public disclosures, that is, where persons make information on breaches available in the public domain. Additionally, whilst protection under the Act relates to “employees”, the Directive extends such protection to “reporting persons”, also covering shareholders and persons belonging to the administrative, management or supervisory body of the entity, including non-executive members, as well as volunteers and paid or unpaid trainees.

The definition of “detrimental action” under the Act has also been extended to cover any form of “retaliation” including suspension, lay-off, dismissal or equivalent measures; demotion or withholding of promotion; transfer of duties, change of location of place of work, reduction in wages, change in working hours; withholding of training; a negative performance assessment or employment reference; and discrimination, disadvantageous or unfair treatment, among others.

Who does the Act apply to?

The Act covers all employees who make a disclosure through an internal or external reporting channel, including:

What kinds of breaches may be reported under the Act?

In order for a disclosure to fall within the scope of the Act, it must relate to an “improper practice”, that is, an action or series of actions whereby:

1 “Outworker” means a person to whom articles, materials or services of any nature are given out by an employer for the performance of any type of work or service where such work or service is to be carried out either in the home of the outworker or in some other premises not being under the control and management of that other person.

2 “Volunteer” means a person who provides unremunerated services through or for a voluntary organisation.

By virtue of the Act, all legal entities operating in the public sector and legal entities with 50 or more workers operating in the private sector are required to establish channels and procedures for internal reporting and for follow-up, which shall enable the entity’s workers to report information on breaches. Entities operating in the private sector with fewer than 50 workers may also be required to establish said internal reporting channels following an appropriate risk assessment taking into account the nature of the activities of the organisation and the ensuing level of risk for the environment and public health in particular.

These internal reporting channels will need to be designed and operated in a secure manner, ensuring that the confidentiality of the identity of the reporting person and any third party mentioned in the report is protected. The internal reporting channel is to acknowledge the receipt of a report within 7 days of that receipt, and shall provide feedback to the reporting person within a reasonable time frame, that is, not exceeding 3 months from the acknowledgement of receipt.

Persons who make information on breaches available in the public domain shall qualify for protection if any of the following conditions is fulfilled:

may be concealed or destroyed, or where an authority may be in collusion with the perpetrator of the breach or involved in the breach.