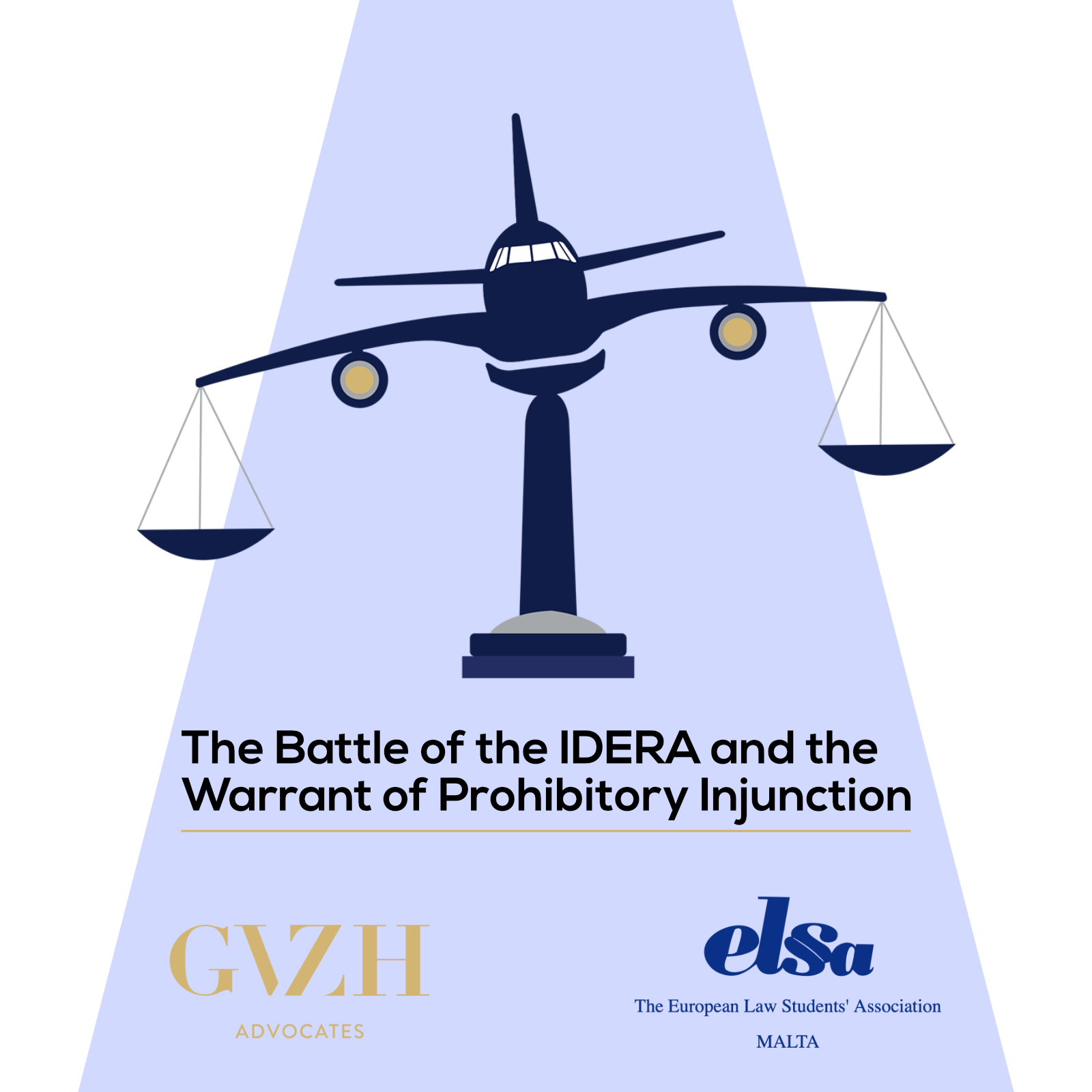 The Battle of the IDERA and the Warrant of Prohibitory Injunction

The decision in the names of Air X Charter Limited and Air X Aircraft Finance I Limited (collectively referred to as the “Applicants”) vs. (1) Firm Mamo TCV Advocates as Deputy Curators acting on behalf of Avmax Aircraft Leasing Inc (Canada) (“Avmax”) as beneficial owner of eight aircraft (the “Aircraft”) and Bank of Utah (United States of America) acting as owner trustee of the Aircraft and (2) The Malta Transport Authority (the “TM”) (collectively referred to as the “Respondents”), delivered on the 8th November 2021, is regarded by many as unprecedented as the court upheld the enforcement of rights under the Irrevocable De-registration and Export Request Authorization (the “IDERA”) over the request for the issuance of a warrant of prohibitory injunction to curtail the Respondents’ rights to implement their IDERAs over the Aircraft. The First Hall, Civil Court, presided over by Hon. Justice Robert G. Mangion, revoked a warrant of prohibitory injunction that had been issued provisionally by virtue of a court decree issued on the 24th September 2021.

Facts of the Case

Avmax had leased the Aircraft to Air X Aircraft Finance I Limited, which was subsequently sub-leased to Air X Charter Limited, who operated the Aircraft under a series of lease agreements. Under these lease agreements, the applicant companies were expected to honour their obligations in making timely payments to Avmax. However, the applicants defaulted on said payments due to the negative repercussions suffered by the aviation industry as a consequence of the Covid-19 epidemic. As a result, the parties deliberated on repayment terms, and agreed to enter into a Memorandum of Understanding (“MoU”) to modify the mode of payment.

Once again, the Applicants failed to fulfill their payment commitments once again, leaving Avmax with no choice but to declare default in accordance with the conditions of the aforementioned lease agreements. Consequently, Avmax and the Bank of Utah announced an event of default in connection to each aircraft, alerted the Applicants of such default, and the Bank of Utah sought the de-registration of all the Aircraft from the Malta Aircraft Registry.

In turn, a warrant of prohibitory injunction was sought by the Applicants to inhibit Avmax and the Bank of Utah, from enforcing their rights under IDERAs registered under the Malta Aircraft Registry to obtain de-registration and subsequently export the Aircraft as well as impeding TM from processing and acting on the applications of the Bank of Utah. The Applicants contended that the:

Considerations of the Court

The Court rejected all of the Applicants’ requests and denied the issuing of a warrant of prohibitory injunction as it determined that the justifications for issuing the warrant were unfounded. It noted that the Applicants had failed to demonstrate, at least prima facie, that they had conformed with the terms of the MoU in complying with their payment responsibilities and maintain their commitments thereunder. Moreover, the Court stated that it is not compelled to execute an interim measure issued by the court of a non-EU Member State court, such as Canada.

Additionally, the Court determined that the Applicants’ allegations that the IDERAs’ enforcement will cause them harm are insufficient. Irrespective of whether the de-registration would significantly affect the operation or business of third parties, this cannot be cited as a legal cause to hinder the creditor’s orders to de-register the aircraft under the IDERA. If a creditor misuses the authority granted to it by such an instrument, they would, in principle, be liable for damages.

The Court found that a creditor, who as Avmax, is an authorized party, or as the Bank of Utah, is a certified designee in an IDERA, holds the irrevocable power to send instructions to the Malta Aircraft Registry to de-register the Aircraft. It further contended that the state authorities where the aircraft is registered are obliged to follow such orders as well as promptly assist the creditor in enforcing its rights under this remedy. Furthermore, the Court also noted that the IDERAs were registered in the Malta Aircraft Register with the approval of the same Applicants, which irreversible power granted to the Respondents by virtue of the IDERAs was never questioned nor negated by the Applicants at any stage of the proceedings.

In light of the foregoing, the Court denied the Applicants’ request for a prohibitory injunction, finding that none of the legal requirements in Article 873 of the Code of Organization and Civil Procedure (Chapter 12 of the Laws of Malta) had been met, namely, to prove that the warrant is necessary in protecting the Applicants’ rights and that the Applicants would seem to have such rights prima facie. The Court proceeded to uphold Avmax and Bank of Utah’s rights under the IDERAs. It ruled that upon deciding whether or not to issue a warrant of prohibitory injunction, the Court must consider if the right the applicant appears to have could possibly be lost at any moment when the demand for such warrant is being made.

While the Court acknowledged that deregistration of the Aircraft might cause significant harm to the Applicants, it is evident that such a factor is not to be considered when deciding whether TM should proceed with the deregistration application based on a genuine formal request. Any other outcome would have been unsubstantiated in terms of both national legislation as well as the Cape Town Convention, (which is adopted within the Schedules to the Aircraft Registration Act (the “ARA”)). This too might have further rendered one of the more critical inclusions to the ARA, superfluous.

Couriers and Delivery Drivers – A special Category within Employment Law?
A month ago
ESG & Insurance: Things to look out for in 2022
A month ago
EU Whistleblower Directive Transposed into Maltese Law: Key Considerations for Companies
3 months ago