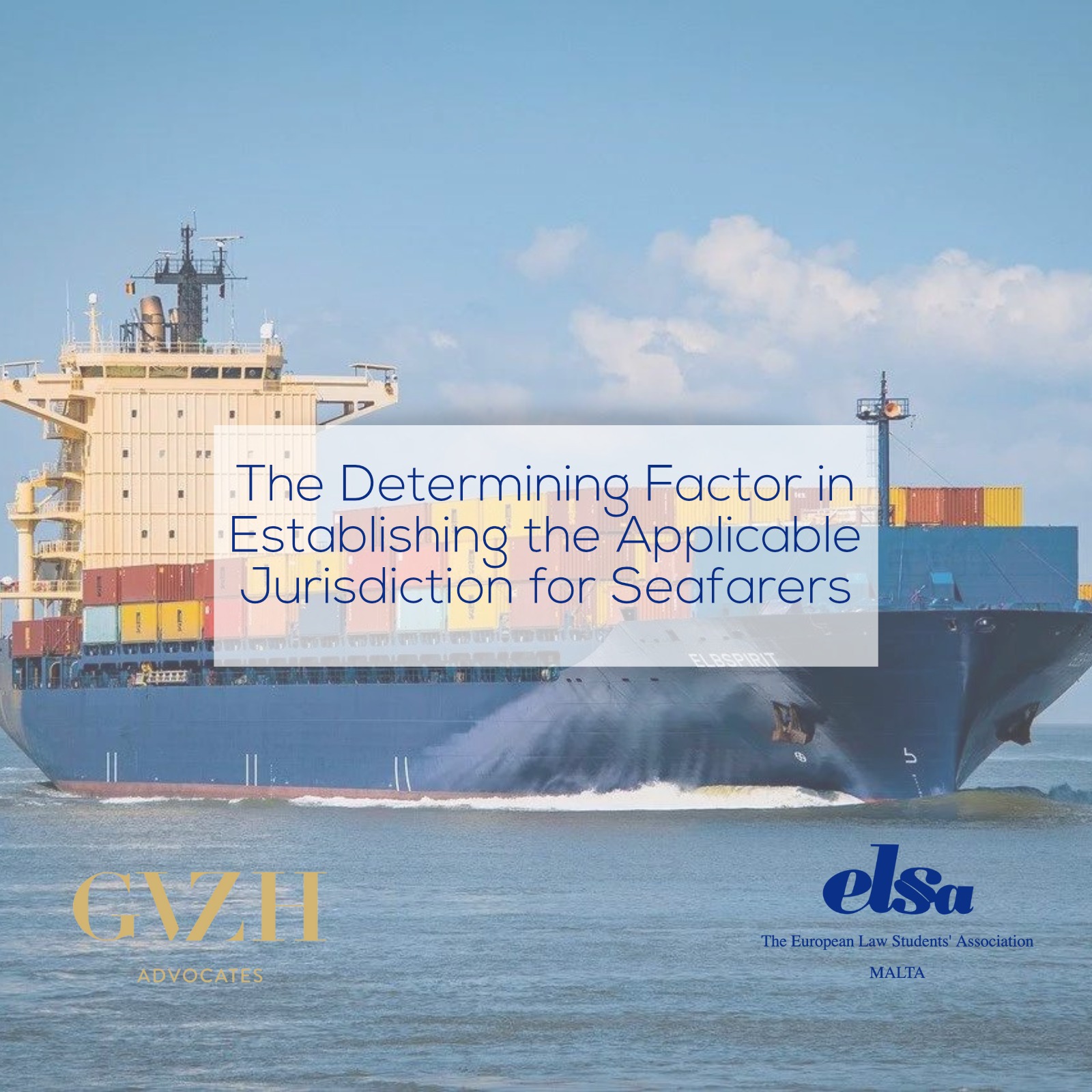 The Determining Factor in Establishing the Applicable Jurisdiction for Seafarers

The employment of a seafarer is in many ways distinct from many other employment positions. Individuals working within the maritime industry are exposed to particular risks which are not present in many other working environments. It is for this reason that the International Labour Organization (ILO) and the International Maritime Organization (IMO) stress the importance of setting out separate employment regimes corresponding to the specific occupational needs of employees working onboard vessels. Based on these organisations’ frameworks, our legal system distinguishes between employees working onboard vessels and all other employees by establishing a separate legal treatment for each. In this respect, the recent pronouncement of the Court of Appeal (Inferior Jurisdiction) presided by Judge Lawrence Mintoff in the case of Albert Gyorgy v Crystal River Cruises Manning Ltd is an important development since it is one of the very few cases shedding light on the jurisdictional parameters of the Industrial Tribunal in respect of seafarers employed by a Maltese law-governed seafarer employment agreement and/or working onboard a Maltese registered vessel.

The plaintiff, Mr Albert Gyorgy, was a chief engineer on board the ‘Crystal Bach’, a vessel registered under the Maltese flag, and employed through an indefinite contract of employment. On the 15th of November 2019, in view of having been abruptly terminated from his employment on board the vessel with no valid justification, Gyorgy instituted proceedings against his employer Crystal River Cruises Manning Ltd (“CRCM”) before the Industrial Tribunal, alleging unfair dismissal.

Gyorgy claimed to have always been meticulous and diligent in his work so much so that he was rewarded with a very senior position on board the vessel. He further substantiated his unfair dismissal claim by stating that prior to his termination, he had never been involved in any incidents, nor had he ever received any warnings as to his performance or lack thereof.

As regards the incident leading to his termination, Gyorgy recalled that in order not to miss his flight on the day he was travelling back home, he had obtained the required permission from the master to disembark before the arrival of the vessel at its final destination, as well as arranged for another engineer to replace him in line with the applicable maritime regulations, which obliged each vessel to have an engineer on board at all times. Notwithstanding, CRCM proceeded with summarily terminating Gyorgy’s employment, allegedly without allowing him the possibility of defending himself.

Gyorgy requested the Tribunal to declare that his dismissal was unfair and unlawful, as well as in breach of the provisions of the Employment and Industrial Relations Act (EIRA) and to order CRCM to provide him with adequate compensation for damages suffered.

The defendant challenged the jurisdiction of the Industrial Tribunal on the basis of the exception arising from Article 39 of the EIRA, which classifies ‘seamen employed on ships under the provisions of the Merchant Shipping Act’ as being beyond the jurisdiction of the Tribunal for the purpose of the notice of and compensation for termination of contracts of service. By reference to the interpretation provision of the Merchant Shipping Act (MSA), a seaman includes ‘every person (except masters, pilots and apprentices) employed or engaged in any capacity onboard a ship’, and as such, the Chief Engineer would fall within the definition of a seaman in terms of the MSA. In light of the above, the applicable law regulating such an employment contract would in turn be the MSA rather than the EIRA.

Notwithstanding the above, the Industrial Tribunal affirmed its competence as it widely interpreted Article 39 of the EIRA, deeming the role of a chief engineer to be akin to the captain of a ship, and therefore, not fitting within the definition of a ‘seaman’. The Tribunal made reference to a similar case whereby the Court of Appeal held that the Tribunal had exclusive power to determine the unfair dismissal of a master under the EIRA, and by analogy, applied the same reasoning to the facts of the present case.

CRCM appealed the decision, arguing that the law does not leave room for interpretational discretion since the exceptions to the definition of a seaman are clearly delineated within the interpretation clause of the MSA. Moreover, the appellant also argued that an analogy should not have been drawn between a chief engineer and a captain of a ship since it is only the latter who is in charge of or entrusted with the ship.

The Court of Appeal agreed with the CRCM’s line of reasoning, based on the latin maxim ‘ubi lex voluit dixit, ubi noluit taxuit’. Therefore, in absence of express legal provisions stating otherwise, the Court decided that the law did not envisage the assimilation of the office of the chief engineer to that of a captain of a ship for the purpose of demarcating the jurisdiction of the Industrial Tribunal. Accordingly, it confirmed that whereas termination proceedings pertaining to masters, pilots and apprentices of a ship fell within the Industrial Tribunal’s jurisdiction, the same cannot be said for seamen. In light of the above, the Court did not consider Gyorgy’s role as chief engineer to have been, in this regard, co-equivalent to a captain of a vessel.

The rule as to the jurisdiction of the Industrial Tribunal over the termination of seamen seems to come down to the delineation of which workers onboard vessels classify as seamen. In the present case, the court succinctly clarified the scope of this definition. Whilst the express reference to masters, pilots and apprentices onboard ships made it clear that these fell within the jurisdiction of the Industrial Tribunal, according to the MSA, the court confirmed that the same could not apply to any other employees on board a ship such as a chief engineer, which are in fact to be deemed ‘seamen’.

One case substantiating this observation in relation to masters of a ship is Paolo Cannistraro v Aria Chartering Limited, wherein the Court of Appeal (Inferior Jurisdiction) may be quoted to the effect that Article 39 of EIRA ‘ma teskludix il- ġurisdizzjoni tat-Tribunal Industrijali għal kull tilwima li fiha jkun involut baħri’, this perhaps referring to Article 39 of the EIRA applying exclusively to termination of employment, collective redundancies and transfer of business. The court even went on to state that ‘l-Artikolu 39 jirreferi ghal baħrin (seamen). Kaptan ta’ bastiment m’huwiex f’dik il-kategorija…’. The same reasoning was applied by the Tribunal in 2014 in the Richard Charles Manning vs Wheels Yachting Ltd decision as to establish that whilst the termination of a master of a vessel would fall within the jurisdiction of the Industrial Tribunal, the same would not apply to an engineer whose employment is regulated by the MSA.

The main takeaway from this decision is perhaps the distinction in the legal treatment of a seafarer from that of masters, pilots and apprentices for the purpose of employment. This reflects the different implications the roles of a master, pilot or apprentice carry with them, inclusive of the relationship between those offices and that of a seaman. This distinction is however not the standard delineation across the employment framework typically governing the maritime section.

Judge Lawrence Mintoff’s judgment in respect of Albert Gyorgy v Crystal River Cruises Manning Ltd is a valuable addition to our jurisprudence on seafarer jurisdiction. It reconciles the few available interpretative overviews taken on by the Tribunal and the Court itself by comparing different interpretations to the intention of the legislator.